A QUESTION OF AUTHORSHIP 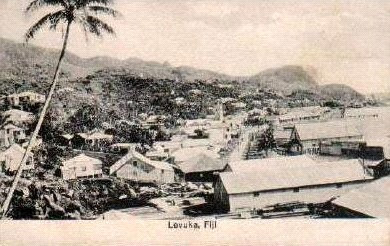 Consider: If someone you knew had met the man of her dreams in the gold rush days of Australia, and he being a sea faring man had taken off to Tasmania for instance or even to Fiji in pursuit of work...if she had given birth to his love child and determined to reconnect with him at all costs,  and did...would you have been at all surprised?
Keep in mind the following scenario will be  the first hint I had, chronologically speaking, that Geraldine Sweeny and William McGowan are together in Fiji. William is obviously working as a skipper on Government vessels plying the islands in the Fiji group, a continuation of the various commands cousin Kim sourced in London from copies of the Fiji Times Shipping Intelligence when he pinpointed the earliest command aboard the Mabel.
The last I knew about Geraldine was the birth of her illegitimate son in Ballarat in 1871 with no records to show she had departed from Australia.
But a letter has been written on board the Marie Louise dated 6th February 1873.  Captain McGowan is late returning from the Yasawas, a group of outer islands to the north of Viti Levu,  and advises his superiors of this in the hand written letter.
The letter addressed to Fiji’s Honourable Minister of Native Affairs is supposedly written by William, but the writing is obviously in a woman’s hand, it has a distinct feminine flow. Not at all the hand of a sailing man. 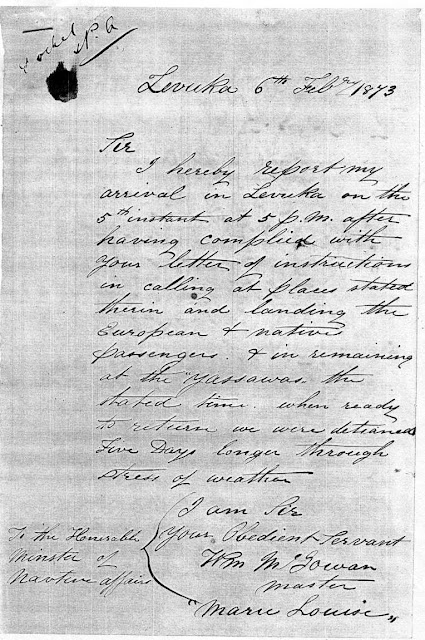 I immediately wonder if Great Grandmother Geraldine is aboard.
On the back of the letter the recipient, acting Attorney General Captain Harding has scrawled a memo to his superior...
‘What’s to be done, the vessels not in harbour and the woman is aboard.’
Written in darker ink across this note is the reply...
‘Chief Secretary says wait till he’s seen the Atty General.’
The letter has been passed to the Fijian Government’s Deputy Attorney General and apparently it hasn’t been favourably received. On the back the recipient has scrawled – ‘The woman is aboard’.  Not Mrs McGowan, nor Miss Sweeny, instead just the slightly derogatory ‘that woman’.
I mulled over this letter for some time.  A copy had been sent to me from the Fiji Archives.  The letter and it’s cryptic message on the back had obviously puzzled archive staff as much as it did me. Very kindly they had forwarded copies of both sides of the single sheet of paper.
...‘we were detained five days longer through stress of weather’...there is no way William McGowan could have written this letter.
Because less than a year later, 1874,  William buys a 2 acre block of land on the island of Galoa, Kadavu  from Peter Whippy and on the official form of purchase he signs an X in the spot where his signature should appear.  Barring a broken hand or some other handicap I would guess William McGowan, a Scots lad apprenticed to the sea at the age of 12, didn’t enjoy much  in the way of a formal education.
But Geraldine certainly could have been the author.  She and her 15 siblings had all received a good grounding in the three ‘R’s’.  Her father, Alfred Sweeny held responsible positions in town councils and with legal firms.

And then I found the proof I needed.  Later, years later following William's death just ten years into their marriage and after Geraldine had by necessity (with five small children to care for...) married her second husband Robert Foreman official documents were lodged with the then Fiji Government to enable her to claim their property as her own.  And Geraldine had signed these documents,  her signature clear proof that the hand writing on both documents were her's.

My guess is that William and  Geraldine, presumably out of wedlock, had been living aboard the Marie Louise, (after all the no doubt pampered wife of Henry Hopkins found the cabin comfortable,) and that predictably, busy body tongues in Levuka were beginning to wag.
___
MARRIAGE AND A GROWING FAMILY
The Marie Louise wasn’t the only vessel my Grandfather McGowan skippered  during his years in Fiji.  The earliest I can place him in Levuka is October 1871 sailing the inter-island trader, the Mabel to the Yasawas, with nothing more until February of 1872 when he commands the Flying Cloud to Taveuni.
The dates of these voyages allow him plenty of time to meet Geraldine in Australia, plenty of time even to crew the Marie Louise from Hobart to Levuka, and plenty of time to establish himself as a skipper in the employ of the hastily created and strife ridden Fijian Government that preceded the annexing of Fiji to Queen Victoria.
William McGowan did eventually marry Geraldine, the precise date isn’t known, though it probably didn’t take place until after 1873, the ceremony performed at Angalore, Kadavu Island by the Reverend Robson and officially recorded much later in Levuka in 1875.  In the 1875 Census both families are listed as living on Kadavu, with William described as a Marine Hawker with wife and 2 children.
I believe one of those children was the illegitimate child Geraldine gave birth to in Ballarat in 1870. (Therein lies yet another mystery.) The McGowan family numbered four sons, Alfred, William, Gordon and Andrew, and two daughters, my Grandmother Maggie born in 1877, and Constance  who died in childbirth after her father's death. 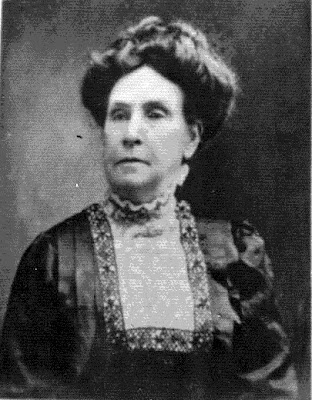 Geraldine in later years.
____
While the Marie Louise wasn’t the only boat skippered by William McGowan in the islands of Fiji, the little Tasmanian ketch seemed closer to the heart of William and Geraldine’s life, privy to their innermost secrets.  And there was a great deal of secrecy in their marriage, their courtship, the birth of their first child – I imagine the Marie Louise would have been witness to a great deal of pillow talk.

Much has still to be uncovered regarding the marriage of the McGowans, but I can tell you what happened to the Marie Louise after she ran aground on the Nukulau Reef,  and I can tell you about some of the questionable people the stylish little boat thereafter rubbed shoulders with.
ooo
Next:  FIJI 1870’S PT 3 –Dodgy dealings aboard the Marie Louise