LIFE & TIMES OF THE MARIE LOUISE

It’s no surprise that the two men most important in Grandmother Maggie’s life arrived in Levuka by ship.  After all the first, her father, arrived sometime in the early 1870’s, the other her husband to be from America  around 1897.  No air travel in those days.


Both arrived clouded in mystery, both married their wives in Fiji, and neither left behind an easy trail to trace. 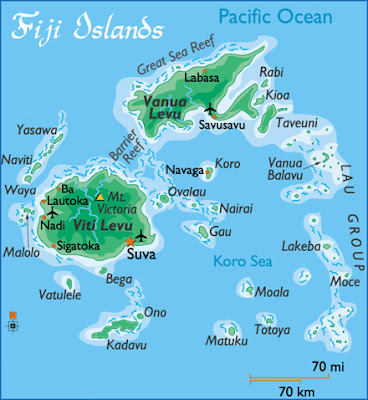 Fiji – Levuka unmarked on the island of Ovalau
William and Geraldine, my great-Grandparents, were two most unlikely marriage partners. A Scots sailor washed up on the shores of rough and ready Levuka and a tall young woman from Sussex who, on the basis of photographs, admittedly taken in her older years, appeared dour and cheerless .
There are mysteries galore with both my American grandfather and his father in law, my Scots great-Grandfather, and they all have a great deal to do with the sea and the ships they sailed on.
If only those ships could talk, what stories they could tell..
_______
THE MARIE LOUISE
Of all the vessels, big and small, that carried mine and my husband’s ancestors across the seas to the south Pacific, none captivated me as much as the little 23 ton topsail schooner, the Marie Louise.

Her history reads like a paperback novel.  In turn she was a rich man’s pleasure palace, then a work horse carrying cargoes of fragrant sandalwood  and reeking guano; one moment rigged with flying pennants, the next wrecked on a Pacific reef.
This little ship started life back in 1864 in a shipbuilding yard in Hobart, Tasmania’s capital.  The Marie Louise, together with a larger Scottish barque, Sapphire (pictured above) were owned by a wealthy and controversial Netherlands born businessman living in Tasmania, Dr W.L. Crowther.  Both vessels were used initially throughout the equatorial Pacific islands both as whalers and in the guano and timber trade.
The Marie Louise, described in a newspaper article as a pretty little ship, was named after Dr Crowther’s daughter, Victoire Marie Louise, who was born in 1845.
(Coincidentally years later, about the same time the little schooner Marie Louise is being bartered in Fiji by a blackbirder to a larcenous island chief, Dr Crowther’s daughter Marie Louise back in sedate Tasmania is marrying the Mayor of suburban Congleton in a glitzy society wedding.)
But back to 1865;  Crowther sends his ships throughout the south Pacific searching for lucrative guano deposits, placing leases on Lady Elliott Island, Bird Island and Wreck Reef, all in the Coral Sea off the coast of Queensland.  The following year the vessel is reported under  Captain Pie, out of Hobart, visiting Christmas Island for the guano trade.
Before too long the guano gathering enterprise is found unproductive, newspapers report Crowther transferring his guano interests in the Anglo Australian Guano Company and in 1869 the business is sold.
But the transaction is not as shipshape nor as above board as it seemed.  The allegedly ‘otherwise honourable’ Dr Crowther has apparently sold guano leases on islands in the Pacific that didn’t even exist, his crime is uncovered and urgent communiqués fly between Government officials.
At the same time the highly reputable Mr Henry Hopkins, also of Hobart is listed as Chairman of the Anglo-Australian Guano Company, but it seemed he too has been duped by the good Doctor. However Mr Hopkins appears to have clawed back some recompense from the Guano Company debacle.   A change in the ownership of the schooner Marie Louise for instance indicates  Dr Crowther has ‘sold’ the vessel to Hopkins.
Hopkins is a wealthy man and enjoys a busy social life.  He’s rather taken with the stylish ‘Marie Louise’, flaunting her at regattas and touring aboard her with his family through the many rivers and estuaries of New Zealand.  A far cry from the guano cargo she previously carried.
But the fickle Mr Hopkins intends replacing her with a newer model.
The Tasmanian Mercury reported the following in the Shipping Intelligence section of June 27, 1871...
‘For several years past the Marie Louise has been owned by Mr Hopkins who employed her as a pleasure yacht, a purpose for which she is in all respects admirably adapted.  Mr Hopkins has recently entered into a contract with Mr James Mackay shipwright, Battery Point for a large schooner yacht which when completed will be used to circumnavigate the globe on a three year cruise.  Under these circumstances he will no longer require the smaller craft, and hence, we learn he intends to dispose of her in the Fiji’s where small craft are in good request.’
I wonder what the little ship thought of that. 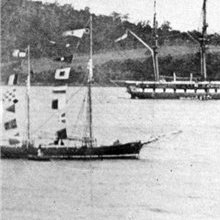 Meanwhile, continually dancing in and around all these unanswered questions about family was the obvious ‘life after death’ question of the wrecked Tasmanian schooner, the  Marie Louise.
____
Were it not for the precise record keeping of the Fiji Government of 1873,  and more importantly the diligent staff of Fiji’s present Government Archives I would have continued on with my family research none the wiser about the rumpus my Great Grandmother caused on the 6th February 1873...
It appears certain correspondence has been received by a Government department, but who actually wrote the letter?
________