QUAKERS IN MY LIFE  - THE FIRST QUAKERS 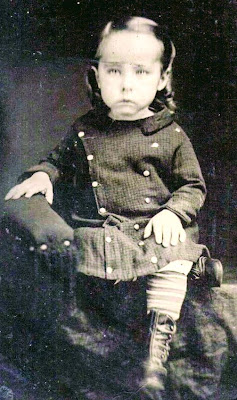 Remember Grandfather?  The American from Indiana, the man who left home in his teens, took on another name and it seems, a completely different lifestyle.

The same Grandfather I wrote about as ChasBert.

Bertie Everett Brown the man he really was; Charles Nelson Brown Parker, the man he became. (If you haven’t a clue what I’m talking about then you will have to go back through my stories to the beginning, to Ancestors 6 Fiji - Maggie and the man from Indiana.)

Of all the ancestors I’ve explored, ChasBert’s were without a doubt the most extraordinary.  My initial search was meant simply to find out who he really was... and in those ten Ancestor chapters relating to Grandfather I certainly did.  His life alone reads like a work of fiction.

But in exploring his life I opened up another mystery,  that of ChasBert’s Quaker forefathers, in particular his seven times removed great grandfather, Richard Browne, reputedly the first man to be buried in the Wellingborough Quaker Cemetery in the Northampton shire of England.  The year of his burial was 1662.
oOo 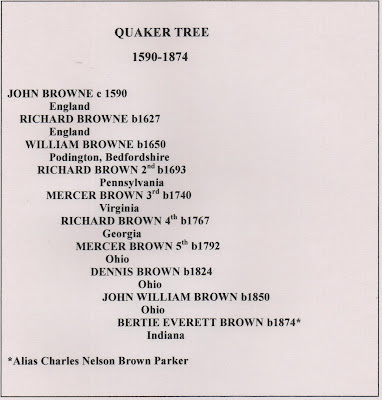 oOo
3 September 1660 Lords Journals, XI. 154. -- Certificate that there have been great assemblages of Quakers and Anabaptists (many of them of Lambert's party) meeting in Northamptonshire, sometimes twice a week, plotting and praying against the peace of the Church and State, by which the peace of the county is much endangered.

The short paragraph above, buried in England’s Parliamentary Archives sets the tone for the story of our first Quaker.

England is holding its breath; Cromwell’s Roundheads and  Puritan Government have been replaced by Charles 2nd and the Restoration. Freedom of choice to worship is in disarray.

The Browne’s of Podington have joined the Society of Friends...the Quakers.    But  who was Richard Browne? 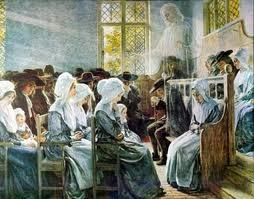 Several family historians have attempted to place him in the bosom of a particular family of Brownes with renowned historic backgrounds.  They’ve contrived to trace his family tree back to the signing of the Magna Carta, and even further back than that.  No mean feat I assure you.

Once these well meaning people hiccupped over the problem of Richard Browne’s father John, and grandfather Francis (two men who stubbornly refuse to be confirmed as ours) they were off with the horses and hounds.

Before long they had accumulated all the romance of lords and ladies, the drama of imprisonment and disembowelling at the hands of kings, a whiff of power balanced with the humility of prayer.  Fascinating stuff.

And I have to admit I was sorely tempted to join the crowd. But with such a profusion of Brownes in England’s history at that time, and nothing concrete, descendent wise, to go on I could only rely on the few reliable clues that have filtered down through the centuries.

In the same book are listed: Daniel Browne, County of Bedford ye son of Richard and Mary d. Puddington 9 mo 11, 1719.

Joseph Browne son of Richard and Mary d. at Puddington 3 mo 9, 1731. (Friends Records in England, according to the writer Henry Armitt Brown of Philadelphia).

(The recorder at the time mistook Podington for Puddington. The shires of Northampton and Bedford share a border. Later still it became Pottington )

Back in the 1600's William Dewsbury traveled around to various Quaker Meetings in England, including the one in Northamptonshire where the Browne family resided. Dewsbury argued that "The Lord is about to plant the wilderness of America with a choice vine of noble seed which shall grow and flourish… Under his blessing arising into a state of prosperity". Many members of the Religious Society of Friends believed this prophesied the spreading of Truth in America, and agreed to immigrate to the new colony. (The Browns of Nottingham, East Nottingham Monthly Meeting records, 1786)
James, and then William Browne, both young men at the time followed the call and took ship across the Atlantic.

According to a widely published family history, the first Brown to convert to the Society of Friends was a farmer in Northamptonshire, England, in the middle of the seventeenth century. He was convinced by a travelling Quaker who began his testimony with the words, "O Earth! Earth! hear the word of the Lord." Later the same man prophesied prosperity in America, and between 1677 and 1684, two of the farmer’s sons emigrated. Charles Brockden Brown, novelist 1771-1810 g-g-grandson of James Brown, son of Richard Browne.

Two of these historians were direct descendants of the Browne brothers who immigrated with William Penn to the new American colonies.  Uncle and nephew, descended from James, they were the highly respected lawyer, journalist, writer and historian Henry Armitt Brown who was born in 1844, and his uncle Charles Brockden Brown born in 1771, novelist, historian who is generally described as the father of the American novel.

Curiously both men died in their 30’s.


With these snippets from history together with the American Quaker brothers’ tendency to name their children after various uncles and aunts and siblings I could at least rest easy with the family of Richard and Mary Browne who lived in the Bedfordshire village of Podington in the years prior to and after their father’s death in 1662.

The names of the following original Browne siblings were to be replicated through history, making it difficult in later years to identify the correct family line, through James, or William. 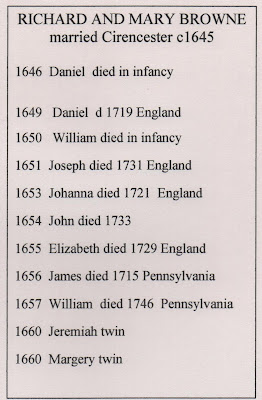 This then is Richard Brown's England of the 1600’s.  The country has been embroiled in rebellion and civil war since 1649 when the King was assassinated.  During the next decade the Puritan, Oliver Cromwell, and after his death his son Richard, will steer the ship of government.  Cromwell’s son proves inadequate and the Royalists regain the throne.

In 1660 Charles 2nd returns to rule over England.

During Cromwell’s relaxed approach to worship, the Society of Friends or Quaker's has emerged as a single entity and taken an active part in Government, but with the return of the Monarchy came the re-emergence of the Church of England.

Non conformists immediately became persona non grata with the Church of England.  The country is ruled with an iron fist by the Throne and by the Church, punishment meted out to this growing number of non conformist sects is cruel and unjust.

" Dear Friends, as touching the manner of our Sufferings at this place; here are ninety and odd in prison, very near an Hundred, most committed for refusing to take the Oath of Allegiance, some being taken out of their meetings, and some at their Houses and from their Employments, and for refusing to Swear committed to prison. We met with a very avaricious inhuman Gaoler, who, because we could not agree to his unreasonable Demands in paying 2s.6d. per week every Man for our Beds, threw twenty of us into a stinking Dungeon, where we could not all lie down at once; and put thirteen of us into another, where we remained five Days; but the High Sheriff understanding it, manifested a large measure of Christian Compassion towards us and caused us to be removed to the House of Correction, where we have had moderate Usage."

In the midst of all this upheaval Richard Browne of Northampton, once a Baptist now a Quaker, is attempting to rear his family.  For Mary Browne, her children all under the age of 12, and possibly by 1661 heavily pregnant with twins, life is a continuing nightmare.

Like many researchers of the Quaker Browne's origin I too latched on to the Masters family of Cirencester - a huge mistake.  Over time and in a future blog entitled the Un-Mastering of our Quaker Brownes, I will explain why this illustrious family can't possibly be ours.  For now though read on as I detail what we knew in 2011.
(the 2012 story - https://rainbowrobstravels.blogspot.com/2012/05/mastering-our-quaker-jigsaw.html     )

Official records of Quaker births, deaths and marriages in England weren’t kept until 1746 with a resulting black hole regarding the Browne family in the 1600’s. There are several entries in early American Quaker records referring to James and William’s father having been a prominent businessman before becoming a Quaker...(and I should imagine later suffering because of his beliefs and as a result being reduced to poverty.)

Both brothers were under the age of 10 years when their father died in 1662, their only memories of him from their time in the village of Podington. The brothers have been described as corders,  involved in the wool industry.

The brothers Browne remaining behind in England remained staunch Quakers. Well into the 1740’s their names, Daniel, Joseph and John are mentioned in English Archives being censured because of their Quaker beliefs. Mary their mother died in 1676 in Wiltshire.

In America William and James Browne will be well documented with only the provenance of their parents in doubt.  No doubt somewhere in the Quaker records at Wellingborough someone will eventually find an obscure reference to Richard and Mary, and perhaps even her surname.

As you can imagine, I  found it difficult to place my Grandfather, ChasBert. in the midst of this Quaker background.

A man who punched a news editor on the nose and then poured ink over his head, a man who tarred and feathered another would be viewed with absolute horror by his many times removed Quaker Grandfather, Richard Browne.

In the circumstances I don’t think even Quaker Richard would consider a mouth wash with soap sufficient punishment.

But I am extraordinarily proud that somewhere way back in the mists of time I can claim connection to a family with such staunch beliefs enshrined in peace and goodwill to others, that they were willing to send two sons to the ends of the earth to preach their creed.

Though not a member of the Society of Friends, I feel privileged to acknowledge a Quaker family occupying such a prominent perch in my family tree.

It’s just a pity some of this piety didn’t rub off on Grandfather.

Should any of my readers have additional information, or even wish to correct, please contact me through the comments box.

Next – Quakers 2 – William the Immigrant