HOW OUR ANCESTORS ARRIVED IN AUSTRALIA

When I was in my thirties and a mother myself I spent many days and nights at the Hospice for the Dying holding my ninety six year old grandmothers hand.

As my frail little grandmother lay, seeming smaller with every breath, I asked her what she remembered of her early childhood.

She thought for a while, this beautiful gentle woman, the centre of my life, her hand in mine.  Lying back on the crisp white sheets of the hospice bed unruffled by the slight weight of her body, my grandmother let her thoughts wander.  I could see her mind reaching back, back through the mists of nearly a century of living.

She was quiet for a while, I didn’t hurry her, we had all the time in the world, all that was left.  Then she replied.

I waited for her to go on, to continue, but she had a smile on her face and I didn’t want to interrupt her thoughts, her memories.

‘Mother’, she continued, ‘ she said I must eat one banana a day, and when they were all gone, I would be there.’

‘Where would you be darling,’ I gently asked, frightened she may not remember any more, this would be the sum total.

Another silence, her hand still clutching mine

‘The ship,’ she finally whispered, ‘the ship that brought me to Australia, to my aunt.’

‘But you came to Australia with Grandpa, don’t you remember?’

Her eyes lit up when I mentioned him, but her hand in mind pressed hard, insistent.

‘Yes, yes I did, but I came first, alone; I was very small.  Marama and the boys stayed behind...in Levuka.’

Again she lapsed back into silence.  Perhaps she was thinking about Grandpa, the wily old American I could still remember back in the time when I myself was very small;  back when Australia was at war and Sydney was awash with soldiers and sailors and he was still alive.

She lay there, silent, thinking her thoughts.

‘Why did your mother send you away from Fiji?’ I finally asked.

But the moment had gone, the memories had slipped back behind tightly closed doors and she could only reply, ‘I don’t know, I can’t remember.’
oOo

The year 1881 brings Geraldine and her young family a double tragedy. William dies, and judging by the wording of later probate documents, more than likely at sea.  In September of that year in Levuka a daughter Constance Annie is born but does not survive.

The only reference we find to William’s death is confined to Constance Annie’s birth certificate:   Name and Profession of Father-William McGowan (now deceased) Master Mariner.

Geraldine at the age of 32 now finds herself in a precarious situation.  William has died intestate and as a single woman his widow must prove to the courts her rights to her deceased husband’s estate.

William’s affairs are in a muddle.  They have property on Kadavu to which Geraldine has no legal claim.  She has five children all under the age of 7 or 8.  With William dead she has no income.

I doubt Geraldine was ever a wilting violet; I think she had an extraordinary strength of will with a practical nature to match. After the initial shock of the two deaths she needed to carefully consider her position. Her nearest kin were thousands of miles away in Australia; her mother in England had dire problems of her own. Seeking legal advice regarding probate she would soon have realised that a woman alone in Fiji has no rights whatsoever.

Geraldine decides to send her daughter, Maggie, to one of her sisters in Melbourne. In July 1882, the month following Maggie’s fifth birthday, Geraldine delivers her only daughter to the vessel Suva bound for Melbourne.  She settles Maggie in the cabin she will share with another family during the voyage.

Outside the cabin within reach of a small child Geraldine hangs a hand of ripening bananas, telling her daughter she must eat at least one banana a day until she reaches Melbourne where her Aunt will be waiting.  The child nods, her little mind is full of instructions, she isn’t afraid of the impending ocean voyage, she is after all, familiar with ships and the sea. Whatever else happens around her however, little Maggie never forgets the bananas.

In the intervening years I gave her story little thought until beginning the study of her life and the McGowan family. Then, just a few years ago I found this shipping entry for a particular unaccompanied young passenger:


At the time I wondered how any mother could send a daughter of such tender years on such a long voyage, alone in the care of strangers, to a woman the child had probably never met. But at that stage I knew nothing about her mother’s bereavement; or of the man who was waiting to officially step into her life.

On the 29th July, 1882, just days after seeing her daughter depart for Australia Geraldine McGowan married Robert Foreman, resident of Levuka.  The bride was 32, the groom 33.  Robert Foreman was a sailmaker from Dundee, Scotland.  He names his parents, Robert Foreman and Margaret Scott, his father’s occupation as a grocer, while Geraldine names her mother as Annie Keates and her father Alfred Sweeny, solicitor. The witnesses were Dr and Mrs Mary Hathaway.

With three aunts and a married brother in Australia to choose from I would imagine Maggie was sent to Adeline in Melbourne. Bertha by then is living in New South Wales, Camilla is in ill health and Geraldine has never met her brother Ethelbert’s wife.

Whichever aunt she lived with, Maggie would not see her mother again for six years until March 28 1888 when the 850 ton vessel Pukaki berthed in Melbourne.  On board was Mrs Geraldine Foreman with her infant daughters Minnie and Edith Foreman.  The eldest daughter, Geraldine Alice known as Lulu, was left behind in Levuka.
The intervening years have seen Geraldine locked in battle with the Supreme Court of Fiji seeking probate and administration of her former husband’s estate. To do this it was necessary to first gain permission from her present husband, Robert Foreman.

So far as we know the only property at stake of any value, was the two acres and home on Kadavu.  It took seven years for the Court to find in her favour and grant probate of William McGowan’s estate to his widow, Geraldine.

Geraldine spent the last few months of 1888 in Melbourne before returning home to Levuka January 15th 1889 on the Hauroto. With her was eleven year old Maggie.  I’m sure Geraldine was eager to return to Fiji and spent as little time as possible in Melbourne.

In fact Geraldine and the girls arrived home safely just ahead of a particularly severe tornado that devastated the outer islands and which the Hauroto was caught up in not long after leaving Levuka for the return journey.

The original shipping notice for the Hauroto shows three children returning with an accompanying Fijian servant named Charlie. Maggie’s name is given as Maud Foreman not McGowan.
___________
On the passenger and crew list for the Hauroto departing Melbourne on January 10th 1889,  listed in steerage are Mrs Foreman, her three children and their Fijian servant Charlie.
Maggie’s age in 1889 is actually 11 years.


Robert Foreman and Geraldine added four daughters and two sons to their family.  The McGowan boys, though they followed in their step-father's footsteps becoming storekeepers and sailmaker's were, none of them at all fond of Robert Foreman, even urging their sister Maggie, to stop calling him ‘father’.  Perhaps as youngsters they recognized his faults; following the birth of the last child, Foreman moved out of their lives, and was not heard from again.

The Cyclopedia of Fiji

On her return from Melbourne, Maggie would spend a further twelve years in Fiji, attending the local convent school in Levuka, rekindling her love of Fiji and Fijians, helping with her younger half brothers and sisters.

But perhaps Maggie kept remembering the years she spent with her aunt in Melbourne, the excitement and diversity of a big city, the thrill of being somewhere different.

And perhaps, as she grew older she began to feel the constrictions that ran hand in hand with the daily life of a small colonial town.  Maybe this is why she turned down local suitors, maybe this is why she accepted the attentions of the worldly, much travelled American who eventually sought her hand and captured her heart.

But did she know then that he wasn’t the person he claimed to be? 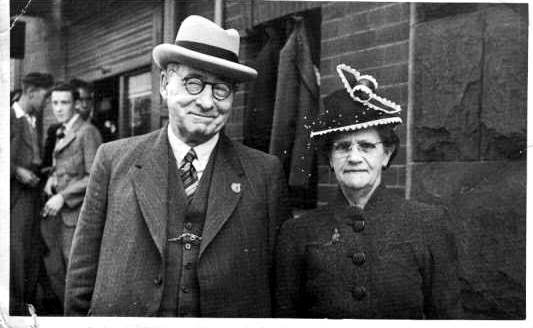 Next PT 6 - MAGGIE & THE MAN FROM INDIANA